What Is Intersectional Feminism?

A rising tide lifts all boats 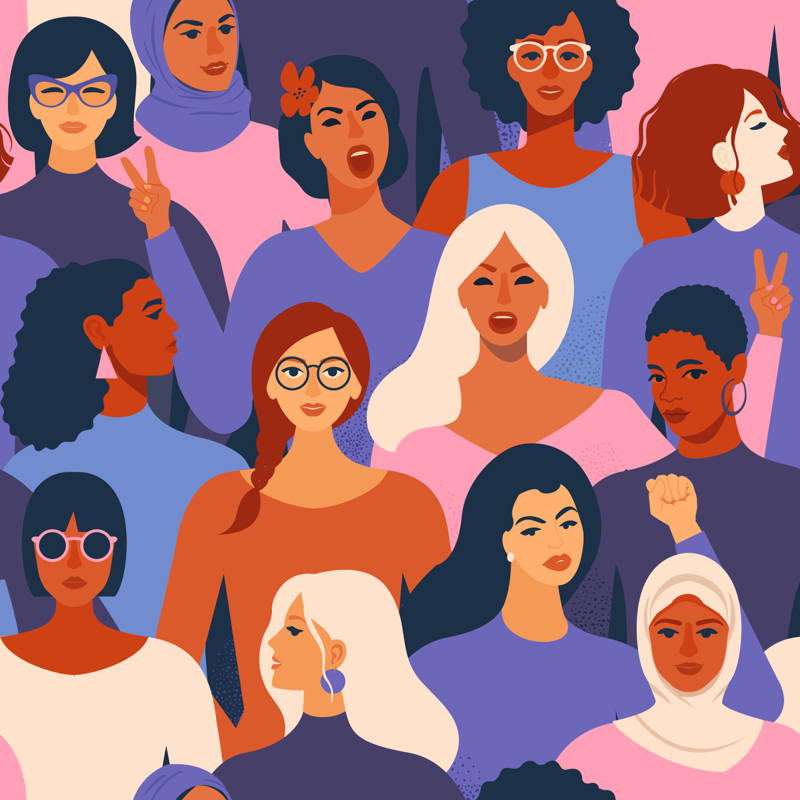 Women are diverse. Although we share the sometimes-terrifying experience of being women in an unfriendly world—carrying our keys between our fingers at night, wondering whether our ride-share drivers will take us home safely—we also represent backgrounds that further complicate our womanhood. On top of gender are layers such as race, sexuality, class, nationality, and mental and physical ability. The way these layers interact with and define the discrimination or setbacks we face is called “intersectionality.”

So, what is intersectional feminism?

Intersectional feminism is that idea put into the framework of the modern women’s movement. At the core of intersectional feminism is this: Gender discrimination does not occur in a silo—diversity is invariably intertwined with the rights and progress of women. In order for all women to prosper, we have to acknowledge and address the oppression all marginalized groups face.

In that same vein, intersectional feminists believe the advancements women make are to the benefit of everyone, especially other underrepresented groups. Think of the adage: A rising tide lifts all boats. If we push for legislation that ensures working women feel, say, safe from sexual harassment while on the job, it’s likely people representing different ethnicities and backgrounds will be swept up in that storm. Imagine an LGBTQ server at a restaurant being harassed by the cis-gender bartender—that server might or might not identify as a woman, but who cares? Just because something helps women doesn’t mean it’s solely meant for women. Everyone can benefit from measures that secure equality.

Feminism hasn't always been about inclusivity

Feminism hasn’t always been as inclusive as intersectional feminism aspires to be—and in many ways, still isn’t. Although the idea of intersectionality dates back to the 19th century and the term “intersectionality” was coined in 1989, Merriam-Webster didn’t officially add the word to its dictionary until April 2017, well into what’s considered feminism’s fourth wave (or third wave, depending on who’s counting the tides). First- and second-wave feminists—the suffragists and the Gloria Steinems, respectively—were groundbreaking in many ways, but they were not inclusive. Mainstream discourse around women’s right to vote, women’s roles in the private and public sphere, and women’s rights at work has been shaped largely by the experiences of white middle-class women.

The quintessential example of how that outdated approach to feminism manifests today is Lena Dunham’s TV show Girls, which attempted to usher in societally aware millennial feminism by tackling issues like race and money, but ultimately failed to do so for reasons that seem obvious in hindsight: The show starred four white women in New York City dealing with issues only middle- and upper-class echelons have the luxury to care about. Body image, dating, and sexual freedom and pleasure were its feminist bread and butter. (Hannah also somehow managed to afford that apartment on a freelance writer’s salary. That, we’ll never understand.) But as revolutionary as some of those plot lines were for television and women, Girls wasn’t the emerging feminist voice it could have been because it was altogether too privileged—not nearly as representative or inclusive of the experiences of all women to warrant the blanket title “Girls.”

That’s a major oversight, especially considering Girls and Dunham were simultaneously champions of “think piece” culture (when every essayist online has an opinion on everything) and using the internet to drive social change. Intersectional feminism has thrived because of these mediums. Social media, the first publishing platform designed with virtually no barrier for entry except a decent Wi-Fi signal, has become the amplifier of diverse voices—and the cultural criticism offered by those viewpoints has changed the way we approach issues of feminism and discrimination for the better. Intersectionality was conceived as a theory years ago, but it was finally born in the digital age, when the only requirements for participation in cultural discourse are real-life experiences and a thought-provoking post.

The problem of feminism without intersectionality

If we look at the issue of equal pay, we see how feminism without intersectionality glosses over reality: Every April, women-focused brands and media post about Equal Pay Day (InHerSight included). The day when, on average, women finally make the same amount of money men did the calendar year before. The common stat tied to this benchmark says women earn 80 cents to every man’s dollar, so it takes three additional months for women to earn their rightful wages.

Intersectional feminists would say no because the reality of how diverse sets of women are coping with inequality isn’t represented in March, April, August, September, or November. Indian-American women might, and probably do, have different opportunities than Burmese-American women, and that needs to be addressed for the latter’s sake. In this example, there’s also no equal pay comparison for women with disabilities, women who are mothers, women who work in male-dominated industries, transgender women, non-binary women, women who are immigrants—the list goes on. What would happen if we factored in all of the ways those women could be docked pay?

That’s a lot to take in and can be a bit overwhelming, but intersectional feminism isn’t about solving everything at once. It’s about knowing your privilege and your biases, listening to others’ experiences, and finding ways to make the world better for all women.

In terms of equal pay, we know that women are often paid less than men for doing the same job, which is illegal. What can companies do to make sure that doesn’t happen? Pay transparency is a viable solution, and it helps people who are minorities, with disabilities, and others as well. You can’t hide other forms of pay discrimination if you’re laying everyone’s salary out on the table.

Embracing intersectional feminism in the workplace

The recent push for diversity and inclusion in the workplace is wonderful and overdue, but when initiatives focus solely on one demographic (“we’re looking at how we can make women engineers feel more included”), intersectional feminists would tell companies to press pause.

Although it’s likely that a monthly gathering or a speaker series would help your female workforce feel more accepted and heard, it’s also true that, by limiting your initiatives to one “checked box,” you’re leaving out additional forms of oppression women experience. What if you have a female engineer on your team who is also a minority? One day, she might experience gender discrimination, but the next, she might have to deal with a microaggression related to her race or ethnicity. How can you help her feel like both aspects of her identity are recognized and valued?

Intersectional feminists believe companies should use a well-rounded approach to diversity by creating programs that allow all employees to voice their concerns and their experiences. Transparency and opportunities for safe, honest conversation can lead to positive changes in even the most traditional workplaces.

For business owners, perhaps the scariest part of that approach is the fear of the unknown—the possible negative feedback you might receive from employees or the things you’ll discover you didn’t even know you were getting wrong.

Don’t worry, we have an answer for that, too: Intersectional feminism is all about awareness, and part of that awareness is an understanding that we’ll all deal with a learning curve or gap in knowledge at some point. No one is as “woke” as they think they are.

For employers, employees, coworkers, and even intersectional feminists, it’s important to remember that. If you stumble upon your blind spot, ask about and embrace the opportunity to learn about what you don’t understand. And if you’re the one doing the teaching? Do so graciously when you have a receptive, earnest audience. To quote the great Ruth Bader Ginsburg, who’s explained institutional discrimination to white men more than her fair share of times, “Reacting in anger or annoyance will not advance one's ability to persuade.”

Read more: There's a Difference Between Condescension and Advocacy in the Workplace

17 Retirement Quotes for This Excellent New Chapter
A Thousand Paper Cuts: Microaggressions in the Workplace
How to Write a Farewell Email to Your Colleagues
More articles ›