Rate Now
Best Companies for Women
All Companies
Jobs
Community
Blog
Research
For Employers
Join InHerSight's growing community of professional women and get matched to great jobs and more!
Sign Up
Already have an account? Log in
Jul 30, 2019 in Company Culture

Has the #MeToo Movement Improved the Workplace for Women?

We asked women, and the response was split

We asked more than 1,000 women about whether they believe the #MeToo movement has improved the workplace for women.

Answers between the negative and affirmative were split almost exactly down the middle. 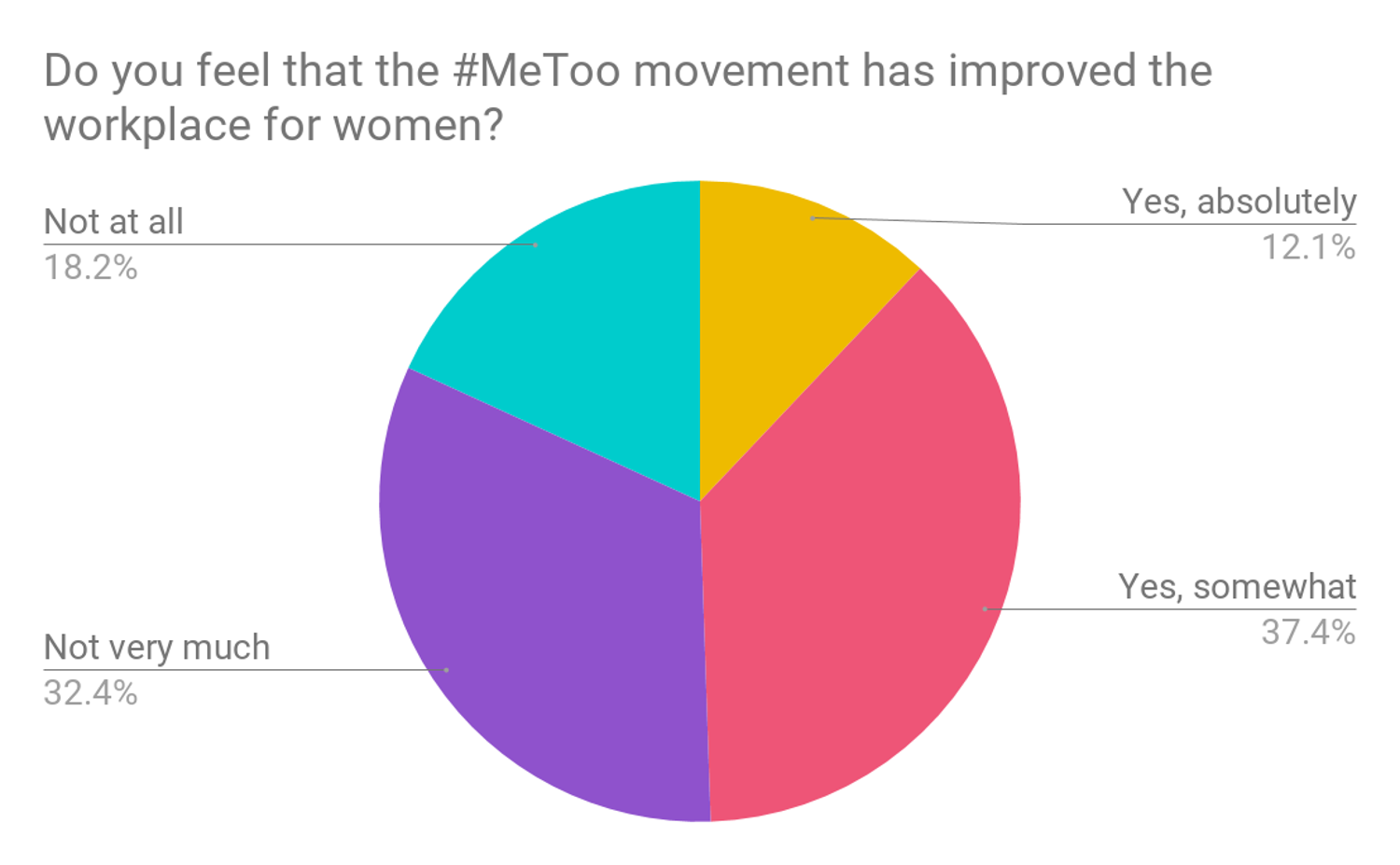 The phrase me too, in regard to sexual assault or harassment, was used as early as 2006, though it was not until 2017, following accusations of sexual assault and misconduct against film producer Harvey Weinstein, that the phrase was widely used and adopted as the moniker for identification of and resistance to sexual violence and harassment and the silencing of survivors, specifically in the workplace.

Since this movement gained traction in 2017, major cases of sexual harassment, assault, and misconduct; boys’ club cultures; and discriminatory practices against women; have been exposed across industries, companies, politics, and among specific people in power in the United States abroad. Perhaps one of the most high-profile cases is that of Larry Nassar, the former USA Gymnastics coach who has been convicted of sexually assaulting minors, many of them his patients.

While the #MeToo movement may be credited with the exposure, prosecution, and conviction of many perpetrators as well as the resignation of those accused, a response has come from the other direction. Sixty percent of male managers say they are afraid to be alone with women at work, with many refusing to offer mentorship to female coworkers. Many women continue to be fired or laid off or otherwise silenced after reporting incidents of misconduct in the workplace; others are publicly humiliated.

While more women may be coming forward to report assault and misconduct and, in some cases, taking legal action, pushback to the movement continues.

Aug 12, 2019 in Company Culture
Sunday Creep Is Real for 42% of Women
We surveyed women about the pressure to begin the work week on Sunday and the feelings of anxiety that come with it
Sep 2, 2019 in Company Culture
Women Complain About the Office Temperature, But No One Does Anything About It
Brrrr, it’s cold in here
Jun 25, 2019 in Company Culture
The Boys’ Club Culture Is More Common Than You May Think
How antiquated ideas of gender are crippling 50 percent of the population in the workplace
Artist: Anna Grimal
Enjoy Free Access to All Our Great Articles
Create a free account to get unlimited access to our articles and to join millions of women growing with the InHerSight community.
Looks like you already have an account! Click here to login ›
Invalid email. Please try again!
...or sign up with social media
Have an InHerSight account?
Log in ›
By signing up, you agree to InHerSight's Terms and Privacy Policy.