In the last five years, companies like Apple (3.5 stars), Facebook (4.0 stars), and Google (3.8 stars) have introduced egg freezing as a benefit to employees. Employers tout the policy as a means of family planning, while critics of the benefit say it sends the message that these companies would rather see their employees work than have children.

But a small study conducted in 2018 found that career is not in fact a leading reason women choose to freeze their eggs, but rather partnership—or lack thereof—is the primary motivation for women to postpone pregnancy in this way.

Eighteen percent of respondents say they have considered egg freezing in order to pursue a career.

But in keeping with the aforementioned study, only a fraction of that have gone through with egg freezing for this reason—only 0.3 percent of respondents. 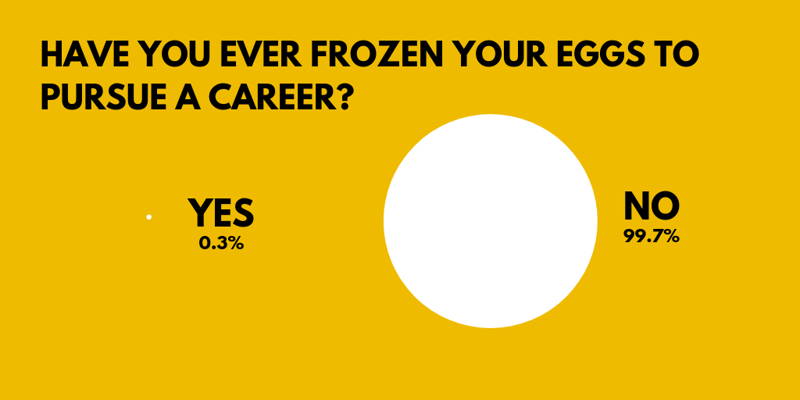 Egg freezing is expensive. Harvesting eggs can cost up to $10,000, and storing them can run you $500 each year. If a woman decides she wants to thaw the eggs and try IVF in the hope of getting pregnant, that can cost as much as $5,000—each time.

The fact that it’s cost prohibitive may account for at least part of the reason why nearly a fifth of women entertain the idea, but less than 1 percent elect to freeze their eggs.

Have you frozen your eggs: 791 women

Have you ever considered freezing your eggs: 779 women

A Guide to Short Term Disability for the Self-Employed

5 Teacher-Approved Apps Your Kids Will Love

Ask a Recruiter: How Can I Ease My Transition Back to Work After Taking a Leave of Absence?

What Does a Software Engineer Do?

"It’s easy to write code, but creating something that others find value in is even better."

What Does a Creative Director Do?

“Creative direction is more about reading the map in the passenger seat than it is having your hands directly on the steering wheel.”