Women whose stories will inspire you to be a hero 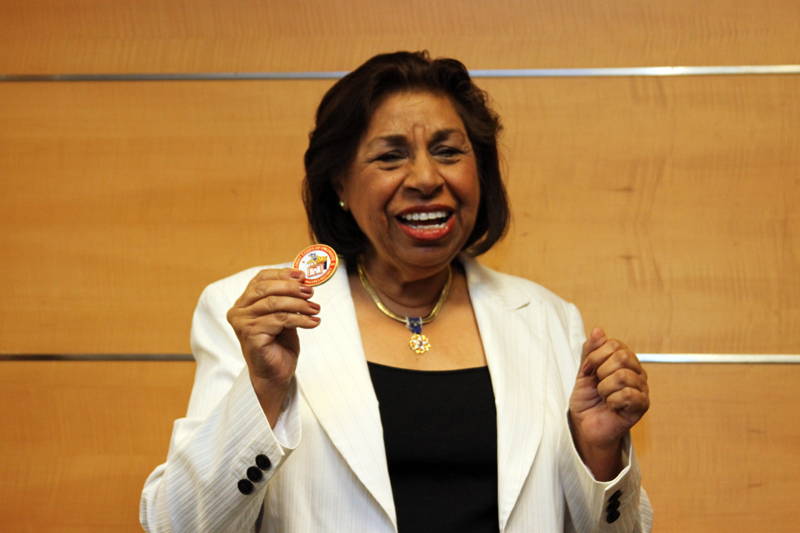 Michelle Obama, Ruth Bader Ginsburg, Serena Williams, Laverne Cox—we’re lucky to have some pretty stellar women to look up to right now...but what about the history-making women that remain in relative obscurity?

From world-class athletes to civil rights heroes to Gen Z trailblazers here are 12 barrier-breaking women that you may not have heard of, but will inspire you to tackle life with all you’ve got.

Often called the “Elizabeth Cady Stanton of women's studies,” Florence Howe was, above all, a teacher. A teacher of English at a private women’s college in the 1960s, Howe was also dedicated to diminishing the educational opportunity gap for black children and worked with under-privileged black students at a Mississippi Freedom School in the summer. She went on to found the Feminist Press, which is the longest ever surviving women’s publishing house.

The first black woman to ever win an Olympic gold medal, Alice Coachman’s journey was far from easy. During her adolescence, she was forbidden from using the same playing fields as her white peers, so she got creative, making high bars out of ropes and sticks and training barefoot on dirt roads. Coachman made history again four years later when she was the first black female athlete to land a promotional deal with Coca-Cola.

Dorothy Lawrence is all-around pretty amazing. An aspiring investigative journalist during World War I, Lawrence was rejected again and again by editors throughout France. She decided to take matters into her own hands: She convinced two soldiers to smuggle her a uniform and disguised herself as a man—forged papers and all. Lawrence turned herself in after ten days out of fear that she’d get those who helped her in trouble, and the army made her swear not to write about her experience, although she ended up writing a book about it anyway.

You may not know Rose Marie McCoy’s name, but you probably know a few of her songs. McCoy was behind songs made famous by big names like Elvis Presley, Nat King Cole, Aretha Franklin, and James Brown and composed and collaborated on around 850 songs throughout her career. Eventually, she got her own office in NYC's famous music-making hub, the Brill Building, and her work helped break barriers for black women in the music world.

In 2015, when Sophie Cruz was just five years old, she personally delivered a letter to Pope Francis (getting past what The New York Times dubbed “one of the largest mobilizations of security officers in American history”), asking him to speak with the U.S. president so that her undocumented parents wouldn’t be deported. In the years after delivering her letter to the Pope, Cruz has become one of the youngest activists in the world, continuing to push forward the conversation for immigration and becoming an icon for the cause.

You know Serena Williams, right? One of the greatest female tennis players of all time—and arguably the greatest—Williams credits Althea Gibson for paving the way for other black female tennis players. In 1950, at just 23 years old, Gibson played her way into the U.S. Nationals and Wimbledon soon after that—eventually becoming the first black woman to participate in and win these tournaments.

Kheris Rogers is a teenage CEO. After being bullied for her the color of her skin, Rogers took matters into her own hands and created a wildly successful company, Flexin’ in My Complexion, which aims to empower girls of color through their wardrobe. Now, she has the support of big names like Alicia Keys, Lupita Nyong'o, and Lebron James.

Eleven-year-old Marley Dias loved reading, but she struggled with the lack of representation in her school’s required literature. In 2015, she started the #1000BlackGirlBook campaign, which aimed to gather and donate 1,000 books with black girls as the protagonist. The campaign blew up, and Dias gathered more than 10,000 books and even secured a book deal of her own.

Before Brown vs. Board of Education, there was Mendez vs. Westminster. In the 1947 landmark case, a young Sylvia Mendez argued against the segregation of Mexican students and white students in California schools—which led to a complete ban on school segregation in the state and paved the way for desegregation on a national scale. In 2011, Mendez received the Presidential Medal of Freedom from President Barack Obama.

There’s a decent chance you’ve heard Hedy Lamarr’s name before—she was one of the most famous actresses during MGM’s “Golden Age.” But there was a lot more to Lamarr than her acting career. In her free time, she worked on numerous inventions, including a new communication system that greatly helped the Allied efforts of World War II—and helped in the invention of modern Wi-Fi. Unfortunately, Lamarr never received proper recognition or compensation for many of her inventions.

If you admire Amelia Earhart, then you’ll love Beryl Markham. A bit of a jane-of-all-trades, Markham is perhaps most well-known for being the first woman to fly nonstop, east to west, across the Atlantic Ocean. In her spare time, Markham did other casual things, like penning her own memoir, West with the Night, and training six Kenya Derby winners. NBD.

Maria Toorpakai loves the game of squash. In fact, she loves it so much that even threats from the Taliban couldn’t get her to stop playing. Toorpakai grew up in a region of Pakistan controlled by the Taliban and where women are discouraged from playing sports. Maria pretended to be a boy in order to continue her pursuits, but word soon got out that she was a girl, and around age 16 she began receiving threats from the Taliban. Eventually, she moved to Canada to continue training in safety, and now has dozens of wins and medals to her name, as well as her own foundation dedicated to empowering young women.

Read more: You Don’t Have to Succeed in Your 20s. These Women Didn’t.