Rate Now
Best Companies for Women
All Companies
Jobs
Community
Blog
Research
For Employers
Join InHerSight's growing community of professional women and get matched to great jobs and more!
Sign Up
Already have an account? Log in
May 3, 2019 in Working Mom

Should Women and Men Be Given Equal Time for Parental Leave?

Working women believe they should—sort of

The United States is the only industrialized country, and one of the only countries in the world, that doesn’t guarantee time off from work, paid or unpaid, after the birth or adoption of a child.

Under the Family and Medical Leave Act (FMLA), the primary caregiver of the child, regardless of gender, is offered 12 weeks of unpaid leave, provided they work for an employer with at least 50 employees within 75 miles of the worksite and have worked for this employer for at least 12 months.

The FMLA does not make provisions if leave needs to be extended beyond the 12 weeks (if the mother or child has continuing health needs, for example). These benefits are for only the primary caregiver of the child, and in the United States, women still devote more time to childcare than men.

The International Labour Organization (ILO), a tripartite U.N. agency that sets international labor standards, develops policies, and devises programs that promote decent work for men and women, states that mothers should receive a minimum of 14 weeks leave at no less than two-thirds of their normal pay so they can “maintain themselves and their child in proper conditions of health and with a suitable standard of living.”

We asked: Should women and men get equal time for parental leave?

We asked 8,000 women about their feelings regarding the length of parental leave for both men and women, specifically whether they believe women and men should be given an equal amount of time away from work after the birth or adoption of a child.

The majority of women—73 percent—say they believe women and men should be given an equal amount of time for parental leave. 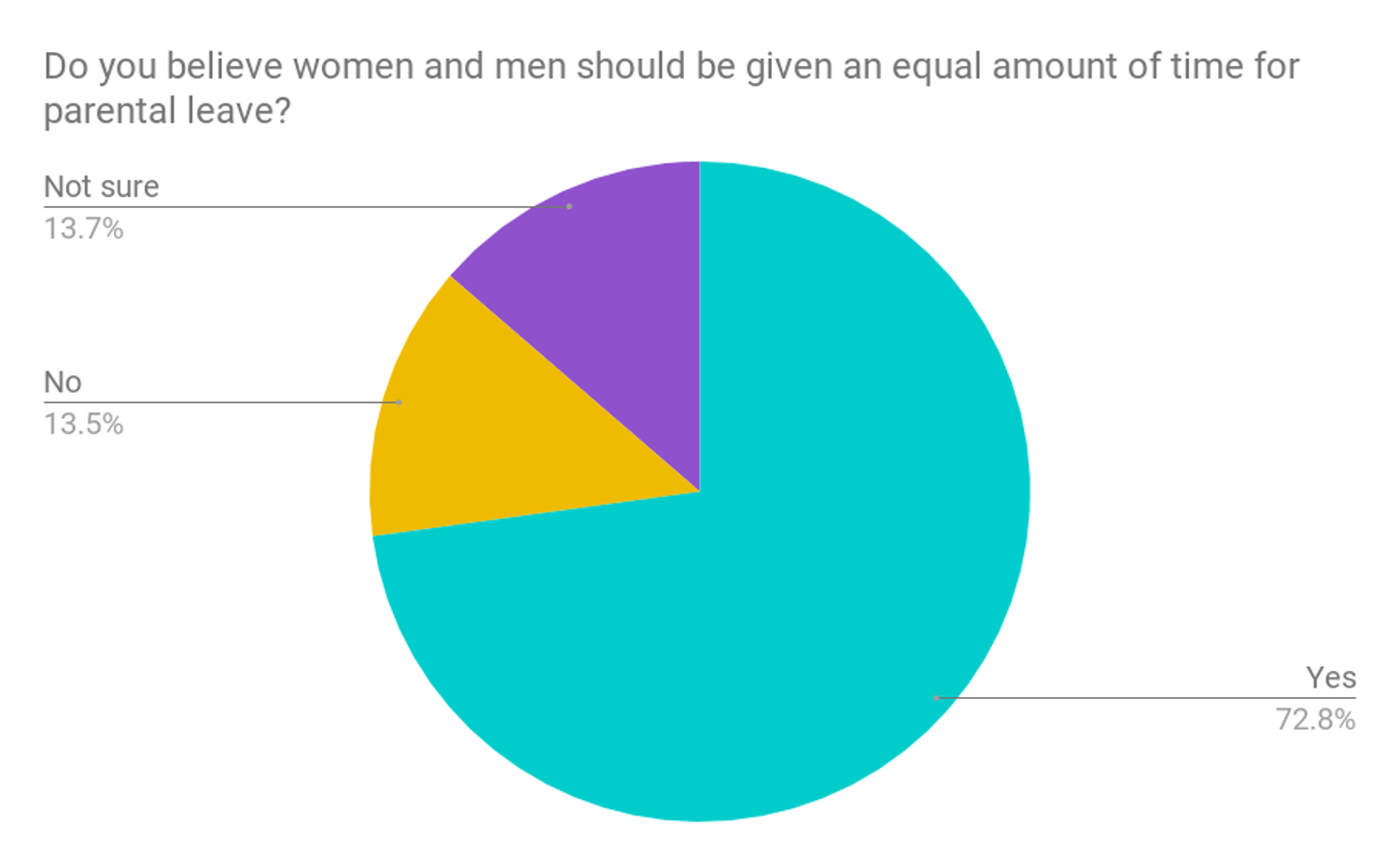 We asked: How long is long enough?

We posed this question another way, asking women the specific amount of time they feel is appropriate for parental leave.

We asked women to identify the specific amount of time they feel is reasonable for mothers. Seventy percent of women say more than eight weeks is a reasonable length of time for paid maternity leave.

The most popular answer was one of the longest time tiers offered in our survey, with nearly 40 percent of women saying they feel 12–24 weeks is reasonable. 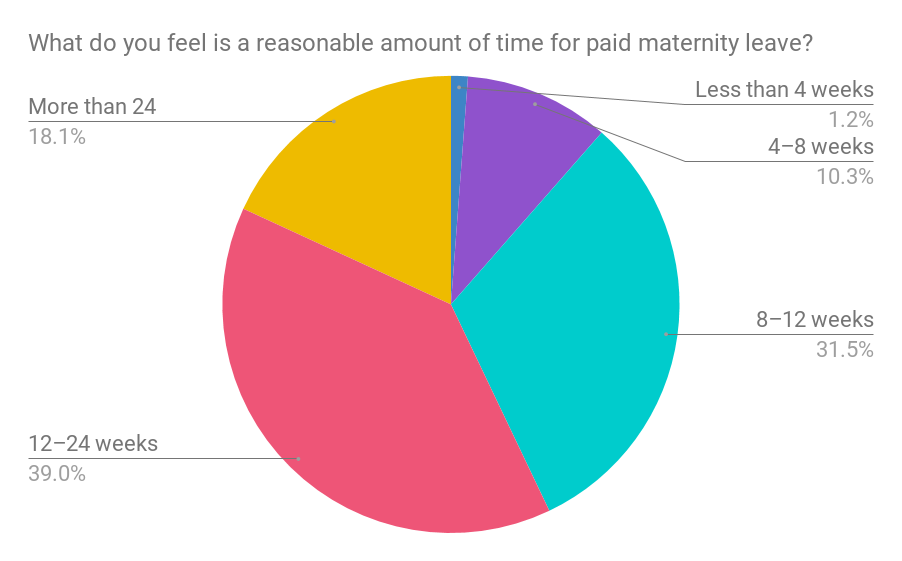 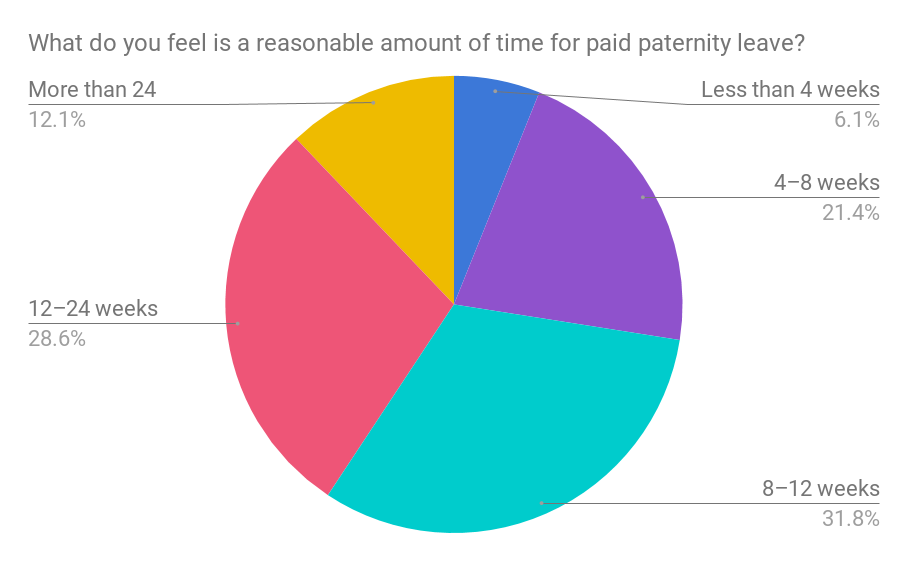 Women are also more likely to feel that more than 12 weeks is reasonable for maternity leave than it is for paternity leave.

Working Mom
Want to add to our dataset?
Rate and review a company and take our latest poll.
Let’s go

The 5 Things Working Mothers Want Most from Their Employers

Jun 17, 2019 in Working Mom
30% of Women Say Job or Responsibilities Have Changed While on Maternity Leave
An illegal practice that affects more than one in four working mothers
May 6, 2019 in Working Mom
The 20 Best Companies for Working Moms, As Rated by the Women Who Work There (2019)
As rated by mothers who also do paid work
May 21, 2019 in Working Mom
More Than Half of Working Moms Say They’re Uncomfortable Leaving Work Early to Pick Up Their Children
Practices that highlight the status of motherhood risk damaging a woman’s workplace reputation
Artist: Anna Grimal
Enjoy Free Access to All Our Great Articles
Create a free account to get unlimited access to our articles and to join millions of women growing with the InHerSight community.
Looks like you already have an account! Click here to login ›
Invalid email. Please try again!
Sign up with social media or...
Already have an account?
Log in ›
By signing up, you agree to InHerSight's Terms and Privacy Policy.