Americans are famous overworkers. Employees in the United States work long hours, take very little vacation (even when it’s available), and many even tout their long work schedules so seldom tempered by time away with hashtags like #nevernotworking or #hustle. Such overwork culture has inspired extensive reporting and investigation, like this story from The New York Times, titled “Why Are Young People Pretending to Love Work?.” The World Health Organization (WHO) announced this year that burnout—a product of long hours and little time away—is now considered a diagnosable syndrome, and in our own research InHerSight has found that burnout is one of the leading reasons why 73 percent of women want to change careers.

We began to wonder how two colloquial concepts, Sunday Creep and the Sunday Scaries, might be, ehem, creeping into our lifestyles.

Sunday Creep is the pressure to begin work on Sunday, often in ways visible to your manager or coworkers, rather than waiting until Monday morning.

Akin to Sunday Creep are the Sunday Scaries—the feelings of anxiety experienced on Sunday regarding the upcoming work week. Having the Sunday Scaries does not necessarily mean you’ll log on, but you’ll definitely feel a sense of dread.

We wanted to know how common these phenomena of workplace pressure are among working women. Turns out, pretty common. 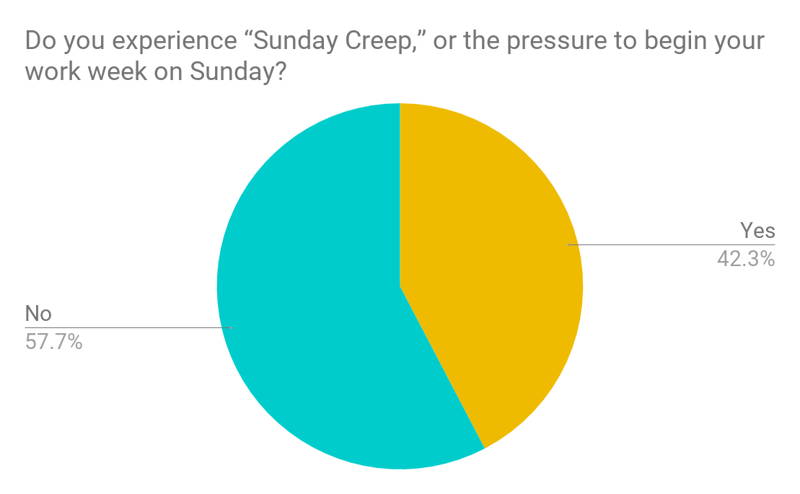 Why do so many women feel like they need to start their work weeks a day early?

Having too much work is the most common reason, with 34 percent of respondents saying they feel compelled to work on Sundays because they don’t believe they’ll ever catch up on their work. Second to that, emails and messages from coworkers and managers spur that Sunday Creep (27 percent). Third, and perhaps most disturbing, is that 13 percent of women say putting in time on Sundays is explicitly expected of them.

Responses are pretty evenly distributed when it comes to when women begin to feel that pressure to work, with the most popular answer being Sunday evening. What compels you: 250 women

How early on Sunday: 337 women